Skip to content
null
null Is a Dash Cam Right for You?

Mounted to the car’s dashboard, these dedicated video cameras can capture footage of accidents, car theft or vandalism. With prices dropping, dash cameras are becoming increasingly popular with consumers. To help you decide if this device is right for you, here are answers to 10 typical questions.

Are dash cams difficult to install?

Most users say no. Dash cameras can easily be attached to your rear-view mirror or mounted to the dash or windshield. They plug into a car's power outlet and can be positioned to record the interior of the vehicle or pointed forward to capture what’s going on outside the front windshield.

How much do they cost?

Dash cams can range from $50 to $400, with more expensive models including extra features like GPS tracking and Wi-Fi connectivity. A typical dash cam sells for about $150 and includes features such as automatic start and stop recording, automatic looping and ability to record both front and rear of the vehicle.

How do they record?

Dash cams are designed to record video and audio whenever the car is on. However, if the car is off, the built-in battery lets the camera operate in “sentinel” mode; it turns on to record when it detects movement or noise.

How many hours do the units record?

The number of hours it records depends on the size of the SD card and the quality of video you’ve selected. Typically, when the card’s available storage runs out, the dash cam will start overwriting the oldest files, so you always have a record of your most recent drive.

What features should I be looking for?

A detailed recording is important in the event of a dispute over what happened. A resolution of 1080p is usually enough, although you can find models that offer up to 4K resolution, which could provide a better recording of specifics like licence plate information. You should also consider the camera’s ability to deal with nighttime or low-light scenarios.

Newer models come with things like GPS that record time, location, collision detection, and red-light and speed-camera warnings. Others offer Wi-Fi Direct, which allows for recordings to be easily copied onto a smartphone. However, if you simply want your dash cam to act as a silent witness while you drive, paying for extras is probably not necessary.

A dangling power cord can impair visibility while you drive. Tuck the cable out of sight or have the camera professionally installed. Note that adjusting your dash cam while driving puts you at risk for a distracted driving charge.

Are the recordings legal?

Recording with a dash camera is normally legal when driving on a public road. However, you generally should try to avoid filming private property and you may be required to turn the camera off when approaching a secured area.

How can I use the recording in the event of an incident?

Dash cam manufacturers actually market their devices as neutral eyewitnesses that can help drivers document accidents, collisions and break-ins. Indeed, law enforcement has been known to ask dash cams owners to share their recordings, as the footage could rule out any doubt of what happened in a court proceeding or insurance dispute. A dash camera can even help you avoid being a victim of a staged accident, an increasingly common insurance scam.

Can I record everywhere I drive?

No. There are times when recording may not be permitted by law. For example, you may not be able to record at a border crossing or other secured areas.

The data recorded from dash cams is helping insurance companies and law enforcement make more informed decisions. It may even curb reckless driving, since motorists are aware that their driving behaviour is being recorded. On the other hand, adjusting the camera while driving can be a dangerous distraction and cause an accident instead of preventing one. Dash cam or not? The decision is up to you.

The information in this article has been adapted from the following web sites. For more on this topic, visit:

Why dash cams are growing in popularity

The rise of the consumer dash cam

Is a Dash Cam Right for You? 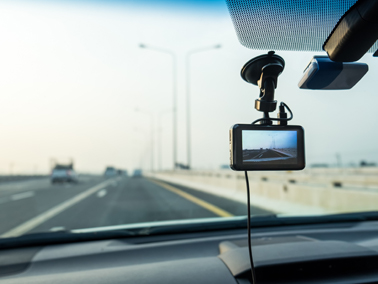 Have you ever witnessed a car accident, or been in one yourself, and wished you had clear proof of what happened? You’re not alone, which explains the growing use of dash cameras.

The information and advice in this article are provided for informational purposes only. The Personal shall not be liable for any damages arising from any reliance upon such information or advice. The Personal recommends using caution and consulting an expert for comprehensive, expert advice. It is also recommended that you consult the owner's manual and follow the manufacturer's instructions and guidelines with respect to the use, installation and storage of products referred to herein.